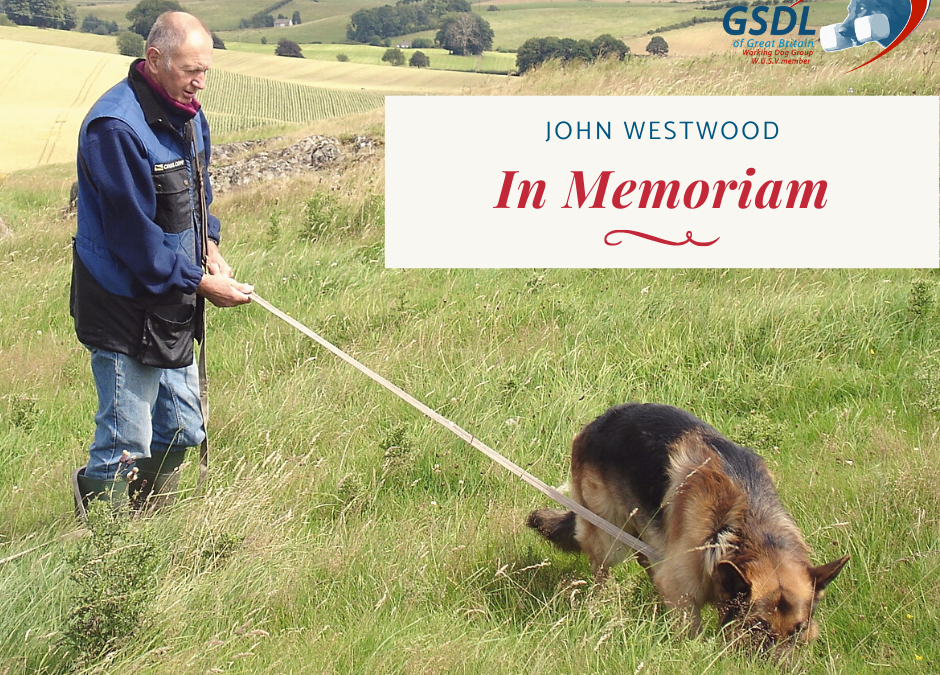 It is with great sadness that we write to report that one of the Working Dog Group’s brightest lights has gone out. John was sadly taken from us on Monday 18th January after a long battle with cancer, so all of our love and warmest thoughts go to John’s lovely wife Alma, and his grown-up children Ruth, Pauline, Lyn, Matt and their extended family.

Many of you will no doubt have many fond memories of John – his passion for the Sport and his love for German Shepherds. John was a quiet man with wicked sense of humour, and a smile that would melt the hardest heart. All those that knew him well, will miss his warm hugs, and caring personality. He is a great loss to us all.

John was introduced to the Sport of Schutzhund close on twenty years ago at Malvern and Worcester Sports Dogs Club under the auspices of the then head trainer George Garbutt, where he made many long lasting and close friendships.

John took his first Schutzhund dog Zac (Nikionis Xandro) all the way to Schutzhund III and competed at the Nationals, and unless our facts are wrong; we believe that Zac was the first UK bred and UK trained, show line, Male German Shepherd to achieve Schutzhund III in the UK – no mean feat.

With his second dog Carlo (Dornholz Drago), John proved that a Working Line Shepherd, that achieved IPO III and represented the UK in the Worlds (qualified twice, competed once), could more than hold its own in the Working Class show arena. John was the first – and only – British competitor in the WUSV Universal Sieger (June 2016 in Paderborn), when he and Carlo were 8th overall out of 38 males.

John’s final dog, Xena (Cyda Vom Ritteweg) was a lovely bitch that quickly achieved IGP II, and had a very promising career ahead of her – but sadly her young life was tragically cut short, when she returned to Germany not long after John’s passing.

We all have countless and fond memories of John and his dogs which will draw smiles for many years to come, but we will all deeply miss his friendship, laughter, honesty, and unselfishness of one truly Great Guy that was a real pleasure to call our friend.

Sleep well buddy and while we all miss you more than you will ever know, we can only but hope that one day, we will all meet up again, and track into the sunset with our faithful Shepherds, on the hills with lush green grass.